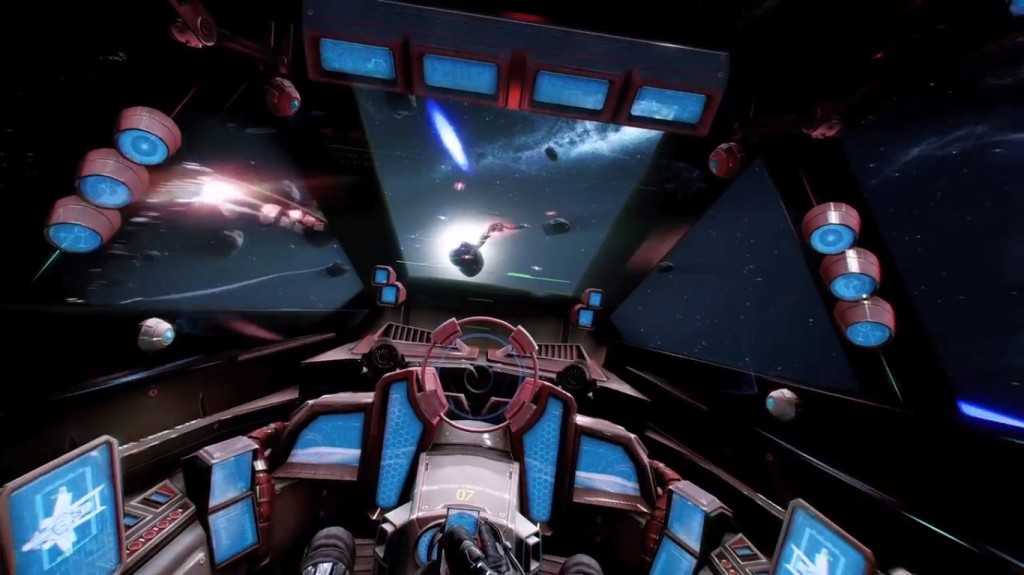 Recently I was fortunate enough to be invited to the Roberts Space Industries (RSI) offices in Santa Monica, California. The development of Star Citizen, the most anticipated space sim in history, is a truly global effort with studios in several parts of the world creating the game and a fiercely loyal community building the meta-universe around it and here I am entering the head and brains of the entire operation. The mission: to get an X-55 Rhino H.O.T.A.S. in the hands of Chris Roberts, the creator of Star Citizen, and his development team so that the Hornet is ready to fly with the Rhino when the Dogfighting module is released at PAX East. 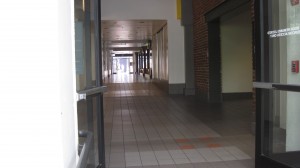 The entrance to their studio is in an auspicious hallway that leads out to the famous Third Street Promenade in Santa Monica.You might not even notice the place if you were walking the promenade enjoying the street performers or doing some window shopping. In fact, a quick look at the directory for this particular building only shows a “Top Secret Company” listed. Hmmm… but walk down the hallway and look up at the window and you’ll see this: 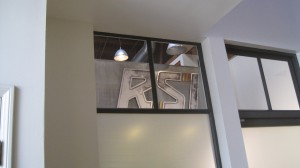 Must be the place! I knocked on the door, it quickly opened up, and I was let in straight into what appeared to be a Hollywood-style film shoot. Literally, I walked into the shot of Sandi Gardiner, Director of Marketing, introducing the Dogfighting module to a throng of cameras for the upcoming video series on their official site. 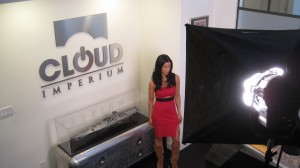 I half-expected to be admonished for clumsily walking in and spoiling the take but being the calm, cool, collected professional that Sandi is, she wasn’t fazed for a second. With a little time on my hands I perused the many starship models, games, merchandise, and film posters that abound the office and pay homage to Mr. Roberts’ illustrious career. 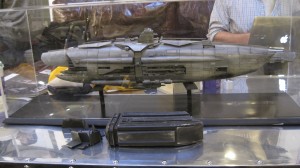 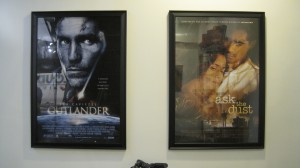 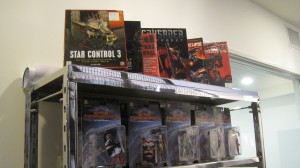 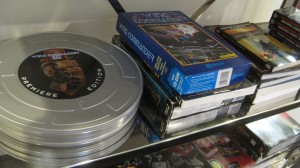 Eventually Chris Roberts came downstairs to shoot more footage and to accept the X-55 Rhino. I then took the throttle and stick upstairs to the bullpen to get the Rhino dialed in for a little Dogfighting demonstration. One of the key devs, Pete Mackay, kindly let me commandeer his work station so we could download the drivers and software and get the Rhino working in game. 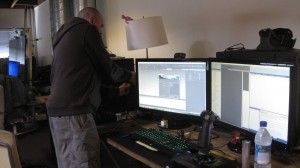 The camera crew then rolled on upstairs and we demo’ed the Hornet in a test level with Pete flying around with one hand on the stick and one hand on the throttle. Pete talked about the custom profile that the team would develop for the Rhino; the weapons systems, the shields, thrusters, all of that will have custom mappings on the Rhino taking full advantage of the number of rotaries and switches on offer. 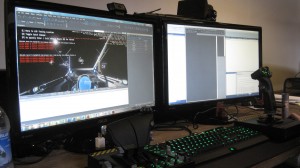 I have to say the Dogfighting looks incredible! Space sim fans will not be disappointed in the action and the visuals and particle effects are amazing. There is already some gameplay video you can see on their website and all will be revealed soon at PAX East. Stay tuned!

Once we wrapped up our shoot it was time to say goodbye. The team headed to the kitchen to enjoy a BBQ spread and I was off to fight the I-405 South traffic back down to San Diego. I only wish I had had more time to try the Dogfighting module with the Oculus Rift; perhaps next time!

For more information on Star Citizen, visit their official website at https://robertsspaceindustries.com/.