After a showing behind glass at E3 and a brief run out at the Oshkosh air show, the Saitek Farming Simulator Hardware will finally be available for demo in Europe at gamescom 2015 in the Astragon booth in Hall 8.1! For those attending you will be able to try out the tractor wheel, pedals, and side panel designed to really enhance the immersion of Farming Simulator.

Here is a quick video of Monty going through the features of the hardware at E3:

Finally, here is the second part of the notes from the Design meeting in Magor, Wales between GIANTS and Saitek. Enjoy!

So Many Buttons, So Many Possible Placements
In the second session at Magor, the focus switched from axes placements to ergonomics and usability issues. Straight away it was agreed that a desk mounted solution would be preferable. A lap mount would not be a viable solution due to the combined size of the two units and nature of this products usage scenario. The wheel should also auto-center as that is replicated onscreen in Farming Simulator 15.

The debate then moved on to the ergonomics when seated at your gaming desk – is the steering wheel at the correct angle? Does it feel natural? Sitting with the 3D model mounted on a desk changed how we placed certain elements, particularly the analogue thumbstick. We started with them in a lower position on the wheel and eventually moved them up to the 10 and 2 o’clock positions so they can be used in a more relaxed fashion with a chair with arm rests.

The most contentious issue was the buttons. The ability to map buttons to commands within the software, will of course, be necessary. But where should the primary buttons be located, since the frequency of use of the buttons dictates their placement? Cluster them all on the right panel or break them up into sections? The positioning of buttons went backwards and forwards. We decided that the large ‘Operate’ button will be positioned slightly above the joystick and that the ‘Mode’ button will be on the top of the joystick so that it’s easily reachable.

Then came the issue of button labels for the side panel – how do we use colour coding? Do we label specific buttons, provide templates for users to design and direct them to print their own layouts? These are the kind of design considerations where it was really helpful to have Manual and Emil from GIANTS in the room. 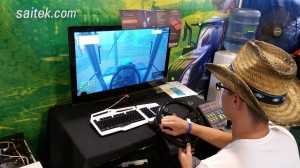 Throughout the session the team were keen to ensure that any future developments with the farming simulator game were also considered. One particular upcoming feature had a direct impact on the method of construction for this product. As this feature is top secret we cannot disclose any further details just yet.